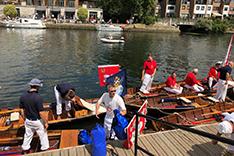 Swan Upping is the annual census of the swan population of the River Thames.  The ceremony of Swan Upping takes place during the third week of July and departed from Sunbury Lock making its way along the River Thames, finishing on Friday 19 July at Abingdon Bridge, Oxfordshire.

The historic ceremony dates back to the 12th century when the Crown claimed ownership of all the mute swans.  The Crown retains the right of ownership of all unmarked mute swans on certain stretches of the River Thames and its surrounding tributaries.

The traditional Thames rowing skiffs belonging to the Queen's Swan Marker and the Swan Uppers of the Vintners and Dyers make their way upstream for their five-day journey and they are very distinctive with the scarlet uniforms of the Queen's Swan Uppers and with each skiff flying the appropriate flags and pennants.  In recent years, both HM The Queen and HRH The Princess Royal have travelled up the River Thames to witness the historic ceremony.

The duty of the Swan Uppers is to count the number of young cygnets each year and to ensure that the swan population is maintained. Two goals of Swan Upping are conservation and education. Cygnets are often extremely vulnerable at this early stage in their development and Swan Upping affords an opportunity to help both adults and cygnets that might otherwise go untreated.

The cygnets are ringed with individual identification numbers by The Queen's Swan Warden and the cygnets' ownership is determined by their parentage, with all Crown birds left unmarked.

The Swan Upping ceremony has become very popular over the years and many people now choose to follow the Swan Uppers to watch the process.